December 2022 will see the launch of many new slot games, however one that should be an immediate hit with players when it launches on the 6th of that month is Thunderkick’s Crystal Quest: Arcane Tower.

With its 4096 ways to win, 6 video reel playing structure, a high variance and a respectable 96.17% RTP, you can see why many players will soon be adding it to their list of favourite slots to play online, and with some luck in playing there is always the chance of winning its 15,000 coin jackpot.

Once any number of winning combinations are formed players are credited with those winnings but then the Avalanche feature will kick in, that sees all symbols that formed a winning combination being removed from the screen with new ones dropping in from above to replace them, each time the Avalanche feature is more than once from a base game spin a multiplier is increased in vale

A random base game Linked Reels feature could be triggered which sees up to six reels spinning in and stopping with the exact same symbols in the same reel positions.

Three scatters awards a set of 12 free spins and any two scatters that then spin in together awards an additional free spins during that bonus game, spinning in three or more scatters during the free spins will see 2 additional spins awarded for each symbol over two in number that appear. 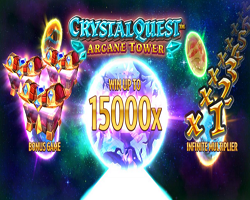 The smooth game play and the animated reel symbols do add to the enjoyment of playing this slot, and with unique sound effects kicking in at various points in time during each playing session, you will certainly find it a unique slot to play online.