The Wolf Run slot, which for reference is an IGT video slot, is often a very noisy slot machine when being played in a land based casino, thanks to some very exaggerated sound effects,. As such you will often hear it long before you see it. This review is going to look at what makes Wolf Run slot a popular one with online and mobile players as well as land-based slot players, too. We’ve also picked out our highest rated casino sites which offer this slot for you to play at, along with some bonus offers for new players.

Play Wolf Run at the Casinos Below 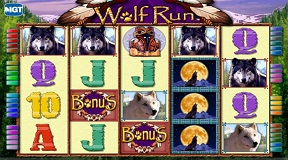 What you should also make a point of doing when you fancy playing slots such as the Wolf Run slot game is to find out how high or low its RTP has been set at. For reference, the certified long term expected payout percentage of this slot is some 94.98%, so not as high as it could be it is fair to say.

There is just one bonus feature game that can be triggered when you are playing the Wolf Run slot game, and that is a set of just 5 free spins. To trigger it, three of the scatter symbols must spin in, one on the middle three reels in a single base game spin.

It is possible for you to re-trigger that bonus game as it is playing off, and it will re-trigger in the exact same way as it did during the base game. This means that you’ll need another three bonus symbols to spin in during any one single free spin to be awarded with additional free spins.

The graphics are as advanced as you would expect for a slot machine as old as Wolf this, but they are not really very advanced at all by today’s standards and do look somewhat dated.

To help you get an even deeper insight into playing the Wolf Run slot machine I will now be answering a range of weird and wonderful questions that some of you out there may just have about playing that IGT designed slot games, either on desktop, a smart phone or tablet device.

? Will the Wolf Run Bonus Game Trigger a Lot?

There is no telling how often or at all whether you will spin in thee three required bonus symbols to trigger the bonus game on any single session playing. Those symbols often only spin in on reels two, three and four, and you need all three of them to appear to get to play the bonus game, which can be re-triggered multiple times too.

? What are Stacked Wild Symbols?

Stacked Wild symbols are simply a set of wild symbols which are placed one on top of each other on the reels of any slot machine. It is possible to spin in a full set of them on one or more reels so that they cover all reel positions on any reels they have been spun in on.

? Can I Get a Screenful of Wild Symbols?

It is possible, but quite rare for you to spin in a screenful of wild symbols either on the base game or during the bonus game of the Wolf Run slot. If you do spin in all of them in view you are then going to be in line for a mega payout if you are playing all 40 pay-lines, that is.

? What is the Best Strategy for Playing the Wolf Run Slot?

Even though you may have to adjust the stake levels to suit your bankroll, I would always advise players to play this slot with maximum pay-lines activated, as those stacked wild symbols could spin in at any time, and the more line you have in play the more winning combinations you could then go on to form.